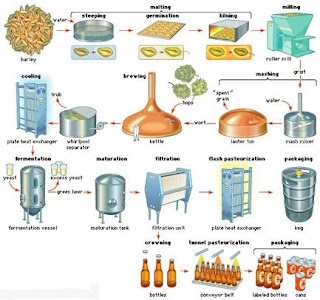 Brewhouse. An exact weight of ground malt is mixed with a predetermined amount of corn grits and brewing water in the cooker. The enzymatic action of the malt solubilizes the starches during a precise time/temperature cycle. The solubilized starch is then transferred to the mash tun, which contains the main mash. Another precisely controlled time/temperature cycle converts the starches to fermentable sugars. The clear liquid, called wort, is separated from the grain by straining in the lauter tun. The wort is transferred to kettles and boiled. Hops are added in exact amounts to provide the distinctive flavor of beer. At the end of the timed boil period, the hot wort is pumped to a tank to allow settling of unwanted protein.
Fermentation. The wort is converted into beer during this stage. A small amount of brewer's yeast and a quantity of air are injected into the cooled wort as it enters the fermentation tanks. The yeast grows, producing enzymes that convert the sugar in the wort to alcohol and carbon dioxide gas (CO2). Some of the CO2 is collected and saved for later use. Fermentation takes about one week. When complete, the beer is filtered to remove yeast and other solids, then pumped to the aging tanks.
Aging. "Green beer" is allowed to rest for an extended period in the aging tanks. When properly aged, the beer is filtered a final time; if the carbonation level is low, additional CO2 is added. Finished beer is then pumped to the packaging tanks.
Packaging, When the aging process has been completed, the finished beer is then packaged in bottles, cans, and kegs. After packaging, the bottle and can products are pasteurized over a period of approximately half an hour at a temperature that is allowed to rise to 140°F, then cooled down. Because it is pasteurized, packaged beer may be stored at room temperature without damage to the product
at August 27, 2009 No comments:

Water. Beer is approximately 90 percent water. Not all water is ideal for beer production, though it can usually be made so. Since water from any two areas is never exactly the same, breweries continually test samples from each plant location. The water is conditioned or treated when necessary to insure uniformity of product.
Malt. Barley that has been steeped (soaked in water) and allowed to germinate (sprout or begin to grow) is called malt. Malt is the basic ingredient in brewing and is often referred to as the "soul of beer." It contributes to its color and characteristic flavor. In some parts of the world, malt is the only cereal grain permitted to be used in making beer (This is according to the German brewing purification law called the Reinheitsgebot, or Bavarian Purity Order. It was enacted in 1516 by Bavaria's Duke William IV, who declared that beer could be brewed only from malt, hops, and water, with no other additives except for yeast.)
Corn. The primary reason for adding corn grits to the brew is that Corn grits tend to produce the milder, lighter beer preferred by the American consumer. Like malt, corn is a source of starch that is converted to sugar in the brewing process.
Hops. Hops are the dried, ripe blossoms of a perennial vine (Humulus lupulus) that are added to beer brews for flavoring. The characteristic bitter flavor of beer is attributable to the addition of hops or liquid hop extract. Hops also possess antiseptic properties that inhibit the growth of bacteria. This is particularly important in the brewing of the non-pasteurized draft beers.
Brewer's yeast. This is the agent that transforms wort sugar into alcohol and carbon dioxide. It is actually a microscopic cell that multiplies rapidly. At the end of fermentation the yeast population has increased approximately fourfold. It is the enormous number of yeast cells that makes possible the rapid conversion of wort to beer. While all brewer's yeasts have the ability to ferment sugars to alcohol and carbon dioxide, they can differ considerably in their abilities and hence affect beer flavor in various ways.
at August 27, 2009 No comments:

Beer is known to have existed 7,000 or more years ago. Pottery from Mesopotamia dating back to 4200 B.C. depicts fermentation scenes and shows kings sipping their version of beer through gold tubes. References to brewing have been found in hieroglyphics on the walls of ancient caves in Egypt. Archaeological discoveries show that beer was familiar not only to the Egyptians but also to the ancient Romans, Greeks, Assyrians, Babylonians, Incas, and Chinese. New York's Metropolitan Museum of Art has on display a wooden model of a c. 2000 B.C. brewery.
In the twenty-third century B.C. in China, beer was known as Kiu. Even the Vikings made beer at sea in their war ships and drank it out of the horn of a cow. In the Middle Ages, brewing was done in the home by women who were known as "brewsters."
In more modern times, Peter Minuit, after purchasing "New Amsterdam," established the first public brewery in 1622. William Penn, the famous American statesman, was probably the first to operate (in 1638) a brewery on a large commercial scale; it was located in Pennsbury,Bucks County, Pennsylvania. Other famous patriots who owned breweries were Samuel Adams, Generals Israel Putnam and Charles Sum-ner, Ethan Alien, and George Washington. President John Adams (1783-1789) even owned and managed his own tavern.
Fraunces Tavern, the oldest tavern in America still in existence, was founded in 1762 by Samuel Fraunces, a black man. It is located at the corner of Pearl and Broad streets in Manhattan, where George Washington said farewell to his officers after a victory in 1783.
at August 26, 2009 No comments:

This is a platform created for the students of HOTEL MANAGEMENT where they can access the notes of Food & Beverage Services. Also useful for the students who have missed out their classes because of some reason.

• The kitchen is the heart of any foodservice business. • Like a human heart, its job is to pump and circulate life, in the form of foo...