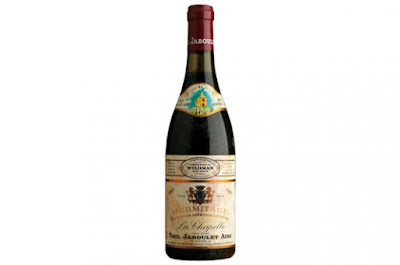 While Paul Jaboulet and Gérard Chave are easily the most prestigious producers from the 134-hectare Hermitage AC, no wine has enjoyed the acclaim attached to the La Chapelle 1961. Its power and harmony were apparent from the start, and for decades the wine has been a star at auction. In the 19th century, wines from Hermitage had routinely been used to beef up lacklustre vintages from Bordeaux, but in the 20th century many vineyards were neglected. The recognition given to La Chapelle 1961 helped to kickstart interest in the great granitic vineyard and its wines. US critic Robert Parker has described it as ‘one of the three or four greatest red wines I have ever tasted’.

The Jaboulet business was deeply rooted in family. At least four members, brothers and cousins, were involved in both the winemaking and commercial side. A highly consistent négociant business, as well as being a producer from its own extensive vineyards, led to Jaboulet becoming the most visible of the great Rhône houses. In the 1980s and 1990s accidents and premature deaths seem to have robbed the house of its former dynamism and, in 2006, Jaboulet was bought by the Frey family, owners of Champagne house Billecart-Salmon and of Château La Lagune in Bordeaux.

The wine was made under the supervision of Louis Jaboulet, who retired in 1976. His better-known son Gérard would only have been 19 at the time.

The granitic hill of Hermitage is always an exceptionally hot site. In 1961, a warm spring gave the vines a head start, but rain in June severely diminished the potential crop. Thereafter, conditions were ideal until the completion of harvest. Extensive coulure (the failure of grapes to develop after flowering) led to unusually low yields.

The Jaboulets have long been major vineyard owners on the hill of Hermitage, owning 19ha of Syrah and 5ha of Marsanne and Roussanne, yielding, in a normal vintage, about 7,500 cases. The lion’s share of the Syrah vines lie within the Le Méal sector, but with significant parcels in other prized sites such as Les Bessards. An average age of 40 years is maintained for the Hermitage vines. There is no actual parcel known as La Chapelle, however; the name refers to the small chapel perched on the hill. The wine is a Syrah blend from the different parcels.

From 1989 onwards, Jaboulet produced a second wine from Hermitage (Le Pied de la Côte) in addition to La Chapelle. In 1961 there would have been no such selection, other than a rejection of substandard fruit in the vineyard. The grapes were trodden by foot and fermented with indigenous yeasts in large, open wooden vats. Although destemming became routine in the 1980s, it is probable that about half the stalks would have been retained in 1961, contributing to the wine’s robust tannins. The finished wine would have been aged for about 18 months mainly in vats, and a very small proportion of barrels, including some made from chestnut wood. It would have been bottled without filtration.
Read more at http://www.decanter.com/learn/wine-legend-jaboulet-la-chapelle-1961-369886/#v8FwsySkhIpIVa5Y.99

• The kitchen is the heart of any foodservice business. • Like a human heart, its job is to pump and circulate life, in the form of foo...